Termites feed primarily on wood. This means when a home has termites, the termites are creating cavities in the structure that will greatly compromise the strength and safety of the home. Many times,  termites have done so much damage that they render homes unlivable until expensive repairs have been completed. Even if you think you are safe because your house is made of steel beams and cement, termites may be present. Sheetrock and plaster can attract termites to your home as both are cellulose and part of their main diet.  Also, a house that contains moisture will draw termites in.

Damage to an area of a building caused by an infestation of termites can remain undiscovered for a long time especially if the area is hidden from view. Crawl spaces and beneath a house are common areas. Termite colonies take between three and five years to reach maturity and cause major damage due to infestation. Termite infestations can cause damage over a short period of time. A 2- by 4-inch piece of lumber can be consumed over a period of about five months. When a colony of termites infests a building, noticeable damage appears between three and eight years, depending on the size of the colony.

In the Southwest Florida area, we have what is known as Formosan subterranean termites. These termite colonies are much larger and much more destructive than in other parts of the US. A medium-sized colony of 3 million Formosan termites could eat one foot of a 2′ X 4′ board in a couple of days. 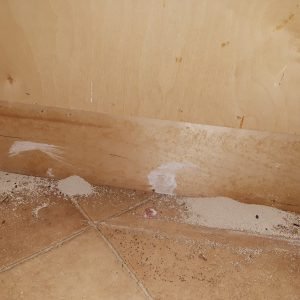 It’s hard to determine how much damage termites will do and how fast. It’s always best to address the issue asap. Ignoring the problem will not make it go away. Once termites find a nice feeding ground, they plan to stick around.

Contact All American Pest Control today in the Southwest Florida area to inspect your home if you think you may have termites. An ounce of prevention is worth the call.

His nose knows termites in Sarasota and Manatee counties

Termite-sniffing dog is ready to hunt for problems in East County.
Snitch and Freedman are one of only three dog-handler termite detection teams in the U.S. certified by the National Entomology Scent Detection Canine Association.